Nice Guitar, I really like that one on the left there!

Sadly I’m having some trouble purchasing one here un the U.S. Anyways I try to stay humble

I guess I should be greatful for what I have…

I’m Giovanni, an Italian guitarist who has played guitar for 15 years.

My gear consists in a Marshall JCM900 100watt combo, Digitech Rp355 and my beloved Gibson SGJ.

I have long hair and like vintage clothing, gear, I would have loved to live in the 70’s!

Rahul here living in the San Francisco bay area. I’ve grown up listening to a lot of classic rock but love post-rock,post-metal, progressive and instrumental stuff as well. Bands I’ve been listening to a lot these days - CloudKicker, Miroist, Northlane, Periphery and Thornhill. I own a a Gibson Les Paul and a Schecter reaper. I usually just practice/play on my yamaha thr30 watt amp.

Look forward to interacting with you all a lot. It’s really inspiring to have like minded and driven people all working towards getting better on the guitar. Thank you for having me!

My name is Bruno, I live in France in the suburbs of Paris.
I’m a very open minded music lover with a variety of musical tastes coexisting to the point of confusion! But as Lou Reed once sang : “deep down inside I’ve got a rock’n’roll heart”.
Being the youngest of a family of seven, I was exposed to many different styles and sounds.
Then in my early teens I started listening to 80’s and early 90’s pop-metal, Hard Rock, NWOBHM, Thrash Metal, Grunge, Punk and alternative rock…while still listening to a bit of electronic music, film scores and also the classics : Queen, The Beatles, Led Zeppelin, The Doors, The Jimi Hendrix Experience, Pink Floyd…
Anyway, looking back I notice that my exploration of music evolves like a spiral : Expanding (to jazz World music, Electronica, classical and ancient music, all kinds of Folk music…) but also coming back to certain albums which I still enjoy listening to after all these years. I can’t name them all 'cause even the main ones make a list of over 30 albums but here are a few (from past to present ) :

… And the list goes on throughout the 90’s and 2000’s with Soundgarden’s “Superunknown”, Radiohead’s “OK Computer”, Mogwai’s “Young team”, Aerogramme’s “Sleep and Release”, Angra’s “Temple of Shadows”, Bloc Party’s “Silent alarm”, Tool’s “10,000 days”… just to name the ones that had the strongest impact on me.
Of course these album involve the guitar but I’ve also listened to non-guitar music : Depeche Mode, Jean-Michel Jarre (pre 1995 period), Vangelis (pre 90’s period), Brian Eno, and a not so famous composer (who started his career as a jazz bass player and later played with Frank Zappa) : Patrick O’Hearn (especially his 1991 album “Indigo”)
In recent years, besides discovering underground artists on Bandcamp, I’ve been listening to Anathema, The National and also post-rock or math rock bands such as Alpha Male Tea Party or Vasa.

Now, about my guitar playing…

I’ve been playing since late 1995 with periods of stagnation (from 1999 to 2001 then from 2003 to 2005 ). Between those two periods I had bought John Petrucci’s “Rock Discipline” (the VHS version) which did help me (and I still remember some advices and exercises from that video) but I lacked the required patience and discipline back then. Later, in 2006 I tried to discipline myself, practicing scales and modes which really helped me improve. I also started giving guitar lessons during that time. But I was facing stagnation in my professional career, so I went to University and had less motivation and time for serious guitar practicing. But during that time, I played in a few bands which helped me gain some confidence in my playing.
From 2012 onwards I learned new things but was still confronted to the same barrier of not being able to play faster than 390 bpm without missing notes (I’ve improved since, being able to play at 424 bpm recently).
At that period I also started experimenting with compositions and sound design. From 2012 to 2014 I mostly used cheep softwares but I ended up being bored with the “mechanical” sound of sequences and programmed drums so I started using a drum pad to make the drums myself…
In early 2016 I thought I had enough good material to make a 10-track demo but after listening to the tracks together I felt there were still too many things to be fixed and the atmosphere of that demo was too “sad and gloomy” (It was just reflecting the mood I was in… 2015 was a depressing year for me). So I wrote down notes to make each track better. But… I needed a break.
I started hanging out more often, I needed some sunshine in my music AND in my life…
And I found sunshine in early 2017. Her name is Antonia. We’re together since.
At about the same time, I bought a classical guitar, left my electric guitar aside and focused more on classical playing. I practiced reading sheet music and playing from sight.
From 2017 to 2018 I joined a collective course to learn Flamenco techniques but a part from a few Sevillanas and very basic Flamenco and Rumba techniques, I didn’t learn much because a lot of the students there were complete beginners…
Anyway I stopped that, focused on other things… 2018 brought its lot of problems… And in 2019 Antonia fell into depression.
So I needed to find strength somewhere. And I went… “Back in black”. Back in metal… Gradually Favoring the electric guitar over the classical, worked on tabs of metal songs I liked, found an app which helped me write tabs and developing ideas of exercises to practice. Lockdown helped me get more time to practice, gave me time to watch inspiring guitar tutorials on YouTube, I subscribed to Kiko’s channel…
… And here I am.

Thank you for having the curiosity to read all this and really sincerely sorry for this long introduction (Believe it or not but I edited it. It was almost twice as long originally😅).

Hi everyone, my name is Harley, I’m from Taiwan and I’m living in Tainan city now. I listen many kinds of music , such as classic rock, power metal ,death metal , slam metal, etc. I have a e-II arrow-7 and a fend strat . I usually use boss katana mini because it’s convenient. I can go anywhere to practice .

I started to play guitar at 15 years old, now I’m 19 , currently study music in Tainan university of technology . I was recommended by kiko to join guitar hacks , I hope I can improve my guitar skill and become a song composer someday, it would be better if I can meet some friends here.
(sorry for my english if it looks weird)

Your English is OK.

Could you be more precise by what you meant by “I was recommended by Kiko to join”? Do you mean personally recommended?

Just signed up today for the guitar workout course. I’ve been playing on and off since around 1997 and just feel lost when it’s time to practice. I love all sorts of music genres, but in guitar I probably identify more with 80’s rock.

Some trivia about me is that I live both in the US and Brazil, and I’m fluent in Brazilian Portuguese. 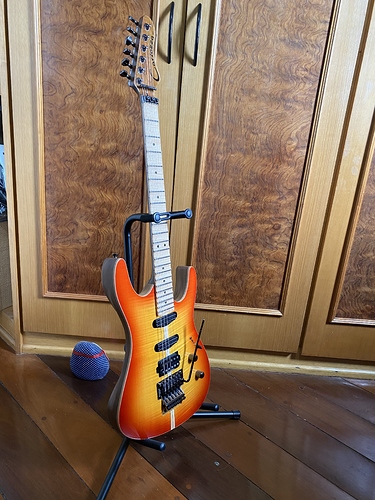 image3024×4032 3.8 MB
If you’re curious about the wood of this guitar, body is Imbuia Canela with flamed maple top and neck is a 5-piece of Sucupira and Cabreuva with a flamed maple scalloped fingerboard—all Brazilian woods except for the flamed maple.

No, Kiko mentioned guitar hacks when he responded fans on facebook and I also saw guitar hacks advertisement with kiko . and then I decided to join it, but it would be exciting if I was personally recommended by him, he’s a great guitarist😆

Nice to meet you my fellow Canadian! Cheers!

Hey everybody, my name is Mike, and I’ve been playing guitar since 2003. I’m a metalhead

, but I enjoy all kinds of music. I think if one wants to be a great musician, then it’s good to listen to other genres and styles and get inspired.

My fav and current gear are my ESP Horizon, Mesa Dual Recto, and all my pedals. I am still not convinced about modeling processors. I still love using stompboxes.

and I am allergic to pasta

Welcome @mikegroove8! And so sorry you’re allergic to pasta…

Hello all I have three guitars a Jackson King V from the 90’s, Fender Strat all right handed swapped over to left handed and a Musicman which is left handed. Eclectic taste from Jazz and Blues all the way to Megadeth. Got to meet Megadeth on a meet and great best moment of my life. Better get to practicing see you all later