So after a bunch of pointy and/or black guitars with scorching hot pickups, I finally got something very different and completely uncharted territory for me .

I was watching a bunch of beautiful Korean Sheraton II’s on reverb, but my local currency took a flop and it just became overpriced. ( 1200-1500 euros is not much for an Epihone by Gibson Sheraton w/hsc - when you make your salary in Euros. But due to the conversion rates , those 1200-1500 became almost more than 2 months of salary for me… Ouch…)

So anyways I decided to look for something dirt cheap second hand stuff from a bigger brand in hopes of some traces of quality assurance.

Lo and behold, an ad popped up 3 corners away from our flat. The guy was selling an Ibanez AS53 for around 150 EUR worth of local currency (at about the half of it’s new price). On a longer night out I might spend more money on assorted poisons…

The guitar is basically unplayed, the guy is a lefty and he to took a chance on this right handed guitar, but couldn’t play it so decided to sell. Still has a few months of guarantee left…

Let me tell you something guys… This thing is awesome. Sure it’s not a vintage 335, but for 150 EUR it is as perfect as it gets. Fret ends on the downward facing side could be a bit smoother but nothing atrocious. Sets up with barely any relief and around an average of 1,5 mm action @12th fret give or take a little depending on bass or treble side and no buzz or dead spots. Unplugged it’s a bit trebly, haven’t played it much through an actual amp, but if you watch the short clip I posted, it does have a rather nice sound, which actually surprised given that it has run of the OEM pickups with ceramic magnets.

There are two things that says “cheap” on it for me: awful tuners (easy fix, but only if I stick to playing it and it’s not just a fad for me) and that “thing” on the headstock below the logo. I understand they tried to imitate some classy graphic, but this reminds of the tramp stamps from the 90s… Oh well.
And the color is worth mentioning too. Officially it is transparent blue flat… Well, the only blue is some badly finished edges on the F holes… And to be honest with you, I absolutely don’t mind it. lol

I gotta say that I am REALLY happy with this one. Great for dabbling, dirt cheap and it doesn’t put me off with bad playablity or atrocious QC. 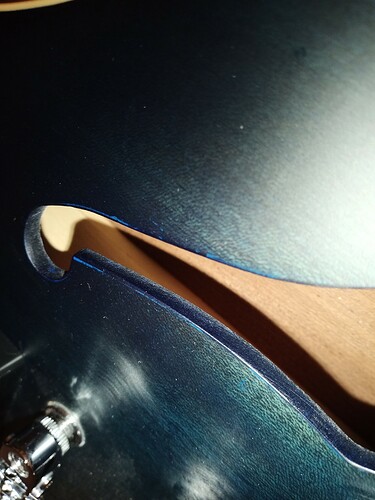 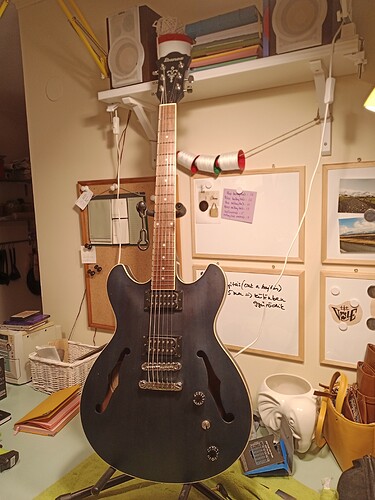 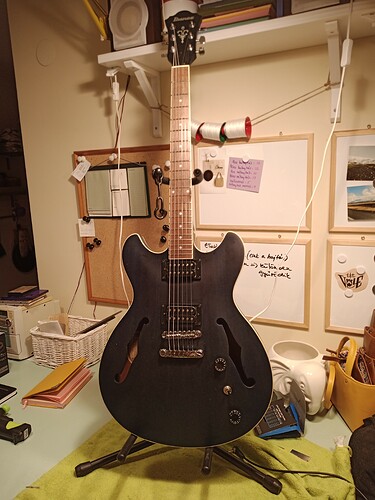 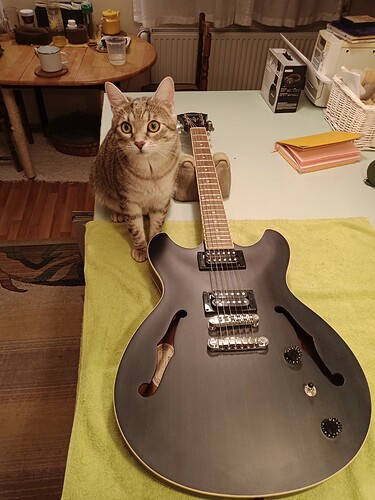 Nice piece!!! Play something for us!

Here’s a small sound sample from my dirt cheap weekend score Ibanez AS53 (NGD thread coming) through a Focusrite Clarett 2Pre and Neural DSP Archetype Plini. Cut some slack for my playing, this is my first crack at “arranging” walking bass lines for anything. I drew first blood on the A Section of Autumn Leaves. I don’t think I ever played in front of people without distortion either…

Did my best to find a fitting outfit for a classy tune… [Autumn Leaves... well... walks]

I will not open a new thread for that but this is mine new tool at home.
First Les Paul for me. Much more different than an ESP eclipse than I thought

Looks great and I bet it plays and sounds sweet!

Can’t find the sound samples though…

Here is one sample during my reaper learning process.
Guitar to Helix to focus rite

Cooool! Nice melody there, I like it! And that guitar sounds super sweet. It feels like it would never stop sustaining those single notes if you don’t move away from the fret…

But I’m stopping polluting your thread

Fine by me. At least there is some activity on the site…

Well done on both fronts- the guitar and the piece! Jens Larsen recently put out a video on how he got through conservatory with a $400 Sheraton and then later got an Ibanez very much like yours. You should look it up on YouTube if you haven’t seen it already.

Just watched that very video a few days ago!

I was glad to hear what he had to say, because I still haven’t given up on snatching a Korean Sheraton II - just like the one he talks about in the vid.

Jens Larsen is a great guy, love his channel. Actually, that walking bass thing I posted, I learned everything from his vids.

Lol, I just bought a Sheraton ii Pro after being inspired by that video! Jens is one of my favorite youtube guitar content creators. He’s scary good!

Agreed! That guy is all business. I love how he’s super focused on teaching jazz and never stray from that path while managing to stay interesting. Many youtube musicians end up turning into a comedian/entertainer and almost completely abandon music. But not his guy!

BTW, how’s that Epi? Does the Pro have any extra apart from the coil split option? Would love to read some details on it!

I think the difference is that the Sheraton ii Pro has the coil split pots and it probucker pickups. The pickups on the ii-pro are really shimmery and clear without being harsh at all. And they’re fantastic with distortion. The guitar really plays well, I want to say it’s like a steinway or guarneri in that it responds well to good technique. Whereas an electric keyboard may be faster, the Steinway will take as much as you give it, if that makes sense?

Dunno shit about pianos/keyboards, but I understand what you mean, makes sense!