So I’ve been a Floyd guy pretty much my entire life (not that I use it that much, I’ve just gotten used to how it feels…

) but only recently have I thought about trying out one of these stabilizer mods. I am NOT talking about hardtailing the Floyd, but stabilizing and allowing for almost perfectly in tune double stop bends. There was one that cought my eye: the German made Tremmory. A whopping 115 Euros, for a spring in a spring device with a screw and a small metal rod. Gimme a break… I went looking for further yutoob reviews. Enter Bryce Van Hoosen. I was lucky enough to catch a vid of his before it was taken down by the German Tremmory guys in which he reviewed a product which does exactly the same, but is produced in Russia. I was thinking about it for a few days, but by the time I decided to give it a go, the video with the Russian product’s info was already taken down. So I shot a PM to Bryce, who was kind enough to hook me up with his Russian contact.

The guy was real easy to deal with. English is not his forte, but he sent all his e-mails in cyrillic and always included a google translated English version, so it went smoothly. He claimed that this is actually HIS invention and the Germans are copying him. He emailed me copies of his Russian copyright/patent certificates along with news clipping about him and his inventions. His story seemed legit, so I decided to support him by buying a unit, which he sold at around the third of the price of a German Tremmory… Anyways, I installed it a few days ago, because the guitar I wanted to use this stablizer in was on a refret and got stuck at the luthier due to lockdowns and some other unforeseen crap.

Based on the Russian guy’s instructions installation was a breeze. No need to alter the setup either, as it does not exert extra pull on the strings. The only things one needs to consider is that it takes up the place of a regular spring in the cavity. In my case the guitar was already set up with 2 springs only, so this little gadget was literally plug n play. After tinkering with it for a few hours, the only downside I’ve found was that this setup is not fit for flutters. But other that that it let the Floyd be a Floyd (well, JT580LP in my case, but irrelevant really, we’re talking about flosting tremolos either way) with all the pullups and divebonbs you can imagine. But the most important part is that it almost completely eliminates the inherent “bend one string and the others go out of tune” problem of the Floyd type bridges. Those double stop bends being in tune sound weird…

In theory it also allows for on-the-fly drop tuning, haven’t tried that one out.

Here’s how it looks installed: 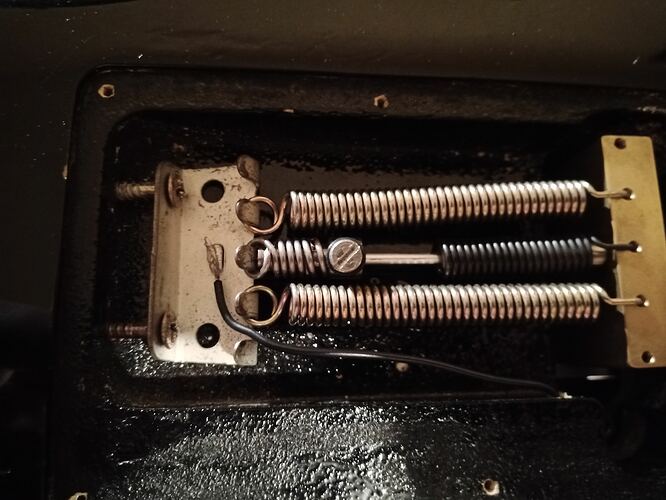 Meanwhile Bryce did another vid on the thing in which he avioded mention the German competoitor/copycat (?) product. I think he’s trying to do some PR for the Russian guy, just ignore that.(BTW if it is really his invention he deserves it I think): I bought one last year. I have not installed it yet. But yea, that German company made some prototypes for the Russian guy and they ended up stealing it.

that German company made some prototypes for the Russian guy and they ended up stealing it.

Hah, I did not know that! I figured it’s a sensitive topic and didn’t bother the guy with asking about it… Dick move, to say the least!