NGD: It's December, so time for some Winterstorm

I just can’t seem to stop throwing my cash away for upper echelon import Jacksons… (Though living in Europe makes the USA made ones every bit as import as the ones I’m talking about, but you all know what I mean ! ;))

Anyways, the new toy is a Pro Series Soloist SL2Q MAH Winterstorm. I wanted a white guitar loaded with white Black Winters. A year or so ago I scored an X Series Soloist. It was a great project, it needed work and setup, upgraded the Floyd Special, got the white BWs and the price was right too (~270 USD). Had a fun time trying to get the best out of it, but I just wasn’rt completely satisfied with it. The rosewood board on a strictly black and white concept and non-matching headstock started to bug me and the guitar overall doesnt sound tight enough for my tastes (I’m guessing it has something to do with the basswood body and the unreasonably big routings for bridge and controls. It is noticeably louder while not plugged in as the huge routings amplify the sound of the strings but it makes the plugged in sound blunt and muddy).

So I was in a hunt for a white(ish) guitar to find a new home for the white BW set and keep my stupid idea of a white guitar with Black Winters alive…!

From my previous experience I was overall very satisfied with the Indo made Pro Series (at least the ones coming out from the Samick factory, don’t have experience with the Cort or Mexican made ones), so I checked out the lineup and found this. Turns out it’s a discontinued model, but manaed to cop one in town in a big music store who usually aren’t on my radar since their profile and my interest don’t really match. But they’re longtime Fender dealers and I guess FMIC pushed some Jacksons on them. Anyways, they gave me a cool deal on it and I bought it home. For the record, they claimed that the guitar was restrung and set up just the previous day and for the first time in my life it was true! !

It was well set up, though with a rather curious choice of 9-42 and Eb standard tuning (at least to me - after 10-46 E st it feels like rubberbands).

After a day of playing around with it, here’s what I can tell:

And now the pickups… This is where I am in trouble. It came with a Distortion bridge and neck (Mayhem set?). My original idea was that OK, the Distortion is going to be cool and all, I’ll keep it and put it in another guitar when I install the white Black winters in this one, but these things sound CRAAAAZY good… !

I do realize its still the honeymoon phase, but man, no mater how much I like what the BW does, I’ll have a hard time convincing myself to change pickups in this guitar. Right off the bat and based on my experience the bridge sounds like a fine mix of JB and Nazgul: way tighter than the JB, but not as much as the Nazgul, middy, very present and oozing 80’s metal like the JB, and considerably fatter than the Nazgul. The neck, especially with the tone rolled off is a sweet and lovely warm cream of a sound. If I knew hoe to play the blues I’d give it a go with this one! !

All in all a happy camper, we’ll see how our post-honeymoon relationship will be…!

Oh and I know that @kiko keeps telling how important the gear is and how it makes me a better player, so in case you’re interested I use the black Jazz III XL picks

Just kidding. I’m every bit as bad of a player as before, but this leaves less money to spend on booze so I guess in this case gear really did make me a bit better.

Here are some pics: 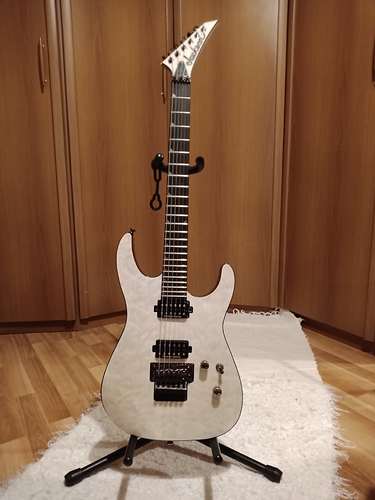 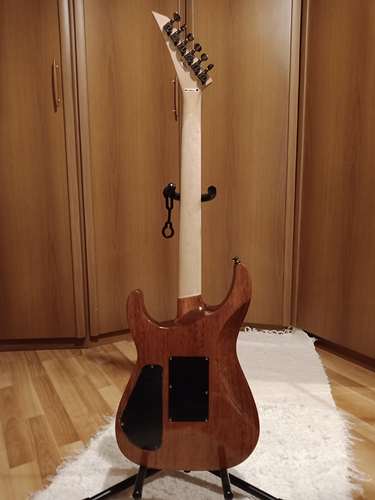 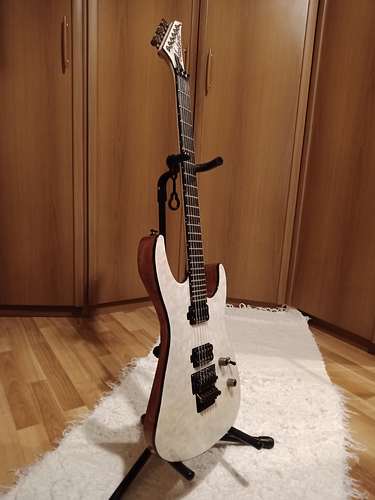 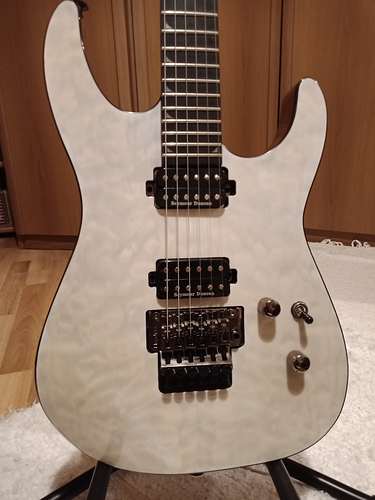 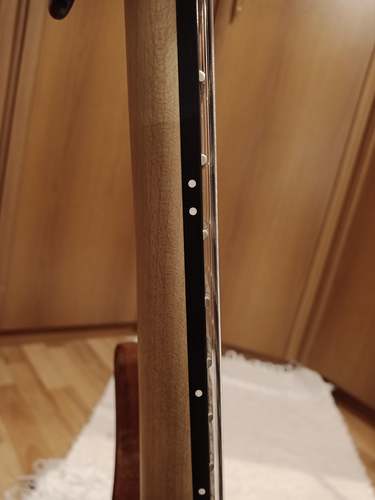 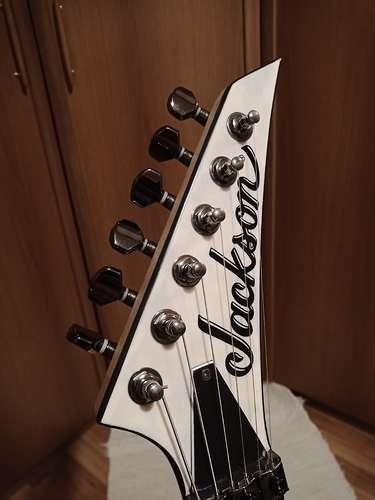 I don’t know as much detail about guitars but I certainly get rubbing that fingerprint off.

You gave me a t-shirt idea.

That is gorgeous. Those Jackson necks are hard to beat – like butter.

@nexion218, I love these detailed NGD thread! This guitar looks amazing, congrats on the score and getting a good deal for it.
9-42 and Eb must really feel light, I am surprised by this string choice from the factory, not for heavy hitters or trash down pickers like we saw on this Thursday’s live with Kiko

I’ve had some very light mahogany guitars, it really depends on where the wood is coming from I think.

Looking forward to the demo video

@Giorgio yeah, well I’d gladly rip through a Lick of the Week with this one, but sadly there’s no active challenge…

Nice Looking Guitar, and that is certainly a mahogany body which probably gives you a warm rich smooth sound… The set up on your guitar looks really good brotha!

I too have a Jackson as well, a Black Monarch Pro with a similar issuses with the clear coat transition between the body and neck, However the solid Mahogany body with the 1/2" Maple top gives mine a rich smooth mid trebly type sound and with the Seymour Duncan Black Out pickups my sustain and punch is over the top and through the roof.

I just had some work done to this Monarch Pro from my favorite Luthier (Sir Mark Larkin of Winter Sound.) He cleaned up the rough edges, repressed and glued down all of my frets nice and tight (to include re adjusting my pick ups…) and completed a full set up. My action is low as it can go and the new Hybrid set of strings I put on there are awesome.

To me a solid body Mahogany body without the maple top just is just to plain Jane (A rich smooth warm sound) and doesn’t give me the mids and high that I prefer.

Thanks man, I take pride in having well setup guitars - at least something good happens to them when they’re in my hands, cause they sure ain’t enjoying when I play them…

Duncan distortion is a great sounding pickup… I have the Rhoads V in winterstorm with the same pickups. Great guitars!

Being a massive Jackson fanboy since my teens I had this stupid idea that one day I shall own every classic Jackson design… The only model I can’t talk myself into? The Rhoads. The OG Jackson design, the one that started it all.

I always get excited when I see one for sale in good condition or for a great price, I start playing with the idea of having one and then I’ll pass… I really can’t explain why. I love the way it looks but I can’t imagine having one. Am I even a real Jackson fanboy?