Ex: C major scale has A minor as the sixth note thus being A minor Aeolian mode. Do I keep the diminished chord from the C major just the way it is or does it become something else when I’m focusing on the The A minor Aeolian mode scale. Does this even make sense?? I’m still learning. Thanks everyone!

To the best of my knowledge, yes. A Aeolian uses the same set of notes (A, B, C, D, E, F, G) as C Ionian/Major, you’re just using A as a tonal center instead of C. Thus the chords you can build will be the same as well, so the chord built on B is still diminished, but it happens to fall on the 2nd degree of the scale instead of the 7th. Though if you add the 7th degree to the chord built on B, it becomes evident that it is only half-diminished, as B to A is a b7, not bb7.

Hey @fabianarellano31 !
I’m not sure if I get you right. If you are asking, if you still use B dim (triads! For four-chords you speak of “half-diminished” - just as @nexion218 wrote) when you are playing A dorian, the answer would be: No!

When we simplify things by saying dorian is the second mode (II), B would be the third (III) and therefore phrygian (Bm(7)). You would use the G ionian scale, so G Am Bm C D Em F#dim(7).

But maybe I got you wrong?

Is this too complicated? Sorry, this is hard to explain without knowing, what you already know about therory.

I think he meant that if he has a C Major/Ionian scale in which there is a (half)diminished chord on B, would building the corresponding chord from the note B still produce the same (half) diminshed chord when working in A Aeolian. To which - I think - the answer is yes. So the the position of the dimished chord in a given scale is not always the 7th degree. At least this is how I understood the original question…

But yeah, it would be worth clarifying that while all Aeolian scales are minor, not all minor scales are Aeolian.

So my answer is only true for A Aeolian, but not for A Dorian or A Phrygian…

Ok, if this is the question, it is easily answered:

The order for the chord steps (I II III etc. - I don’t know the english term, it’s “Stufenakkorde” in German) remains the same for every A aeolian (or C ionian or D dorian etc.) song. This would be A aeolian, B locrian, C ionian, D dorian, E phrygian, F lydian, G mixo.

Do you know, what I mean?

I think you guys are correct but I think I was mostly asking if the key is in A minor the two choices I could think of from the G and C major scale is either Aeolian or Dorian but then I noticed that the Aeolian mode for C major(6th note being A minor) is closer to a minor scale(WHWWHWW)than the Dorian(coming from G major) even tho Dorian is also a minor mode. Does this make sense? Sorry guys again and thanks for the help.

Ah! Yes the Aeolian IS the natural minor scale! Just like the Ionian is the major scale.

If you’re looking at the modes of the major scale, you have 3 major and 3 minor modes the the “bastard child” Locrian.

The Dorian is the “special kind of minor”, since it has a natural 6th degree, but in turn that is the characteristic note of it.

I feel like much of your confusion stems fromnot exactly clear definition and terminology. But worry not, ask away and we’ll try to help!

Haha yeah sorry I’m still not there but getting there! So if the key is in A minor do I just figure out the A minor scale( Am Bdim C Dm Em F G) or do I try to figure out what mode(either from the G major or C major)it is coming from? Also do the chords stay the same even tho I’m shifting chords based on the modes? Ex: Note G moves to the back of its chord progression and A minor becomes the first note being Am Bm C D Em Fdim G and is this Am Dorian or do I switch it to a minor scale? I’m terribly sorry if it’s getting more confusing. 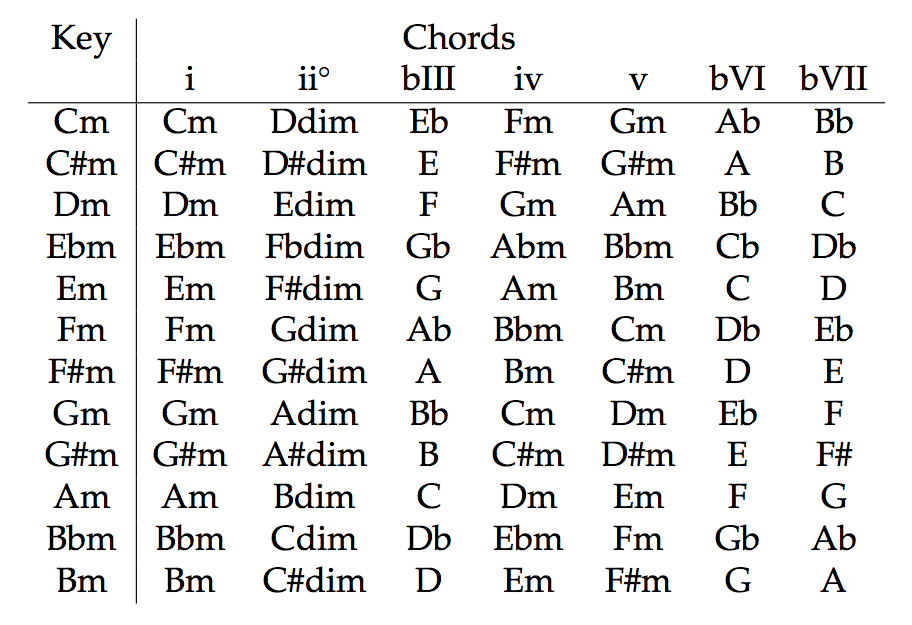 I guess you are thinking too complicated.

You have “WHWWHWW” as you wrote ,which is the natural minor scale aeolian. Those “H’s” seem to move to the left when you climb up to the next step (for example from A aeolian to B locrian).
So you’d get HWWHWWW (locrian).

If you do this once more, you’ll get WWHWWWH (ionian or natural major). By doing so on the other hand you NEVER CHANGE THE NOTE MATERIAL, because it just doesn’t happen! Read on!

If you have the key “C”, for example in ionian mode, you’ll always have C ionian. Even if you change the chords that fit into that key (C Dm Em F G Am Bdim). Because it’s a mode, I’m sure, you know, what I mean.

If you have a song in dorian mode, for example in D dorian, you’ll have THE SAME chords as in C ionian. Read the next example to clearify this.

The same for a song in E phrygian. This would be C Dm Em F G Am Bdim (as above in ionian) as well, but beginning with Em (Em F G Am Bdim C Dm).

Does this help? If not, play the chords on the guitar using barré chords, maybe you’ll find this easier.

Here’s another way to look at it:

Imagine the notes of C Major(Ionian, C, D, E, F, G, A, B) being on the dial-plate of a clock instead of the hours. Now it doesn’t matter where the hand of your clock starts and no matter how many times it goes around, it will always show the same notes, just as a “real” clock shows always the same 12 numbers. However, depending on where you start, the sequence, in which the notes (the “hours” of the day in our clock analogy) follow each other will be different, making each possible sequence (there are 7 possible in each key) unique. Imagine you have to do the same thing during a day (wake up, have a coffe, squat, have breakfast and shower, go to work blabla), but on each day of the week, you start at a different task: Monday you start with your evening beer, then wake up, then coffe, etc. Then on Tuesday, you begin with waking up, then coffee blabla. Then on Wednesday you start with squatting , then breakfast etcetc. I think we can agree, the each day would have a quite different and unique mood to it…

These differently arranged days would correspond to the modes. Same things, in different order creating a mood. I hope this answers one part of your question.

First off: a note in itself is never minor or major

and A minor becomes the first note

A note is just a note. What makes it minor is the addition of a minor third, a perfect fifth and if we wish to go beyond the basic triad, you can add a minor seventh.

If you write out all the 7 possible note series in a key (eg.: C Major and build a series starting on C, then D, then E then F etc) and inspect the intervals relative to the starting note you’ll notice (hopefully) that even though each of the seven note series have their own unique unterval patterns, they have their similarities too.
You have three series/scales whose:

These are all considered Major modes/scale. In the key of C Major, these scales are the ones that start on the 1st (C), 4th (F) and 5th (G) of your parent scale and are called Ionian (the same as your parent scale), Lydian and Mixolydian modes.

If you dig deeper, youl find that they are also unique in a way: compared to the parent Major(Ionian ) scale, the Lydian has a sharp fourth degree (in C Major/Ionian the 4th note of the scale (F) is a perfect 4th away from from the root (C), but in Lydian, the 4th degree (B) is an augmented fourth away from the root (F) ) and the Mixolydian has a minor seventh degree compared to the original Major/ Ionian.

Also, you will find 3 scales that have the following in common:

These scales are all considered to be minor and they can be constructed by starting a note sequence on the 2nd (D), 3rd (E) and 6th (A) degrees of the parent scale (in our example C Major/Ionian) and are called Dorian, Phrygian and Aeolian, respectively. What makes them unique? The Dorian has a major sixth between its root (D) and the 6th degree (B) (none of the other minor modes have this), the Phrygian has a minor second (between E and F) and the Aeolian is your natural minor scale with major2nd, minor 3rd, minor 6th and minor 7th.

The 7th mode you could construct from a single C Major scale is called the Locrian. It has a minor 2nd, a minor 3rd, a minor 7th. Based on this this could be a minor scale, right? But check out the 5th degree! It is a diminished 5th!

So if you were to decipher the mode being used, you are looking for these unique traits. Does this make sense? Or still not the answer you were looking for?

Okay, I would say that this topic has now been really comprehensively covered.

Of course, you can also find more info on the Internet. Together with our explanations, it should hopefully be clear what the tone levels are all about.

I think that if there are any further questions, they can best be answered by trying them out on the instrument itself.

What do you think @fabianarellano31 ? Do you now understand a bit more, what those “Tonstufen” (tone levels?) are?

Oh, btw.: I received a scholarship from my state to do a concept album on the different modes of the Ionian system. The proposal came from me and they thought it was worthy of being promoted.
I can let you know when the album is ready.

Please do let us know!

It’s definitely thoroughly explained. I’ll spend some time reading it soon! Thanks for all the help.